Principal accused of forgery to help ex-con get schools job

A former southwest suburban elementary school principal has been charged with forging documents to help a man convicted in a fatal beating get a job at her school.

Tashona R. Marshall, 32, of Chicago’s Roseland neighborhood was arrested Thursday on charges of forgery, official misconduct and making a false statement for a contractor on a public bid.

Marshall resigned from Laraway Elementary School in Joliet Township on Jan. 3 after serving one semester as principal.

On Jan. 5, District 70C Supt. Gary Bradbury sent a letter to parents saying Marshall had been “removed from the principalship due to a serious lapse of professional judgment in the purposeful falsifying of a personnel record.” 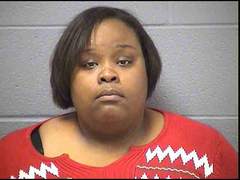 Prosecutors said Marshall helped Lashone White get a job with the district in the fall, even though he was on parole for the fatal 2005 beating outside a New York strip club.

State police Sgt. Ruben Bautista said Marshall and White were already acquainted when he applied for a job with the district. It was not clear Friday what kind of job.

“She knew his history would show he is on parole, so instead of sending his fingerprints to the Bureau of Identification for a background check, she (reused) her own and presented them to the school as his,” Bautista said.

Soon after White was hired, Bradbury did a background check of his own and discovered White was on parole. When he contacted state police to learn how that hadn’t been reported, the investigation led to Marshall, Bautista said.

Six years ago, White was sentenced to seven years in prison for delivering the final blow in a fatal beating outside a Coram, N.Y., strip club on April 24, 2005.

White, Curtis Williams and Joseph Smith began fighting with Louis McGrath, 24, inside the club, and the fight continued out into the parking lot, according to local media reports at the time. McGrath’s body was later found by a dancer on her way home.

White was charged with manslaughter. He was found guilty of second-degree assault, as prosecutors acknowledged McGrath instigated the fight, reports said.

Sources said White is no longer employed at the school district, but is not being sought on criminal charges for his hiring.

Marshall was released from the county jail Friday after posting a $15,000 bond.