A former Abbotsford math teacher accused of assaulting two 17-year-old female students appeared before a Clark County judge on new charges Monday and the judge ordered him to no longer use the Internet, according to online court records. 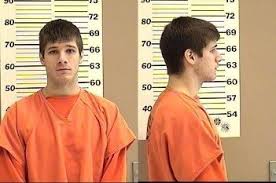 Prosecutors say the new charges were filed after Follen contacted one of the alleged victims, which was a violation of the terms of his bond on five counts of sexual assault of a student by school staff.

Follen posted a $7,500 cash bond on the new charges, and a judge ordered him to no longer use the Internet, court records said.

n arrest warrant has been issued for a former Abbotsford math teacher accused of sexually assaulting two 17-year-old female students, after investigators say he violated his bond by contacting one of those students.

Andy Follen, 25, of Spencer now faces three more charges including bail jumping and intimidating a victim. Follen has also been charged with five felony counts of sexual assault of a student by school staff.

According to his bond, Follen was not supposed to have any kind of contact with any of the alleged victims, but prosecutors say he called one of them in February.

Clark County Sheriff’s Department officials say Follen called one of the girls on the phone, asking her to set up an account on an online website which would allow them to chat with each other. They say the 17-year-old told investigators Follen told the girl he loved her and wanted to see her again before she turned 18.

Authorities say Follen also asked the girl to contact the district attorney to get his charges changed.

Follen was charged in early February, just days after he resigned from a teaching job he had for four years. In a recent court appearance, Follen requested a new attorney. His next court date is scheduled for March 25.

According to court documents, one girl told investigators that she kissed Follen in his classroom last November and that in subsequent days it eventually led to “everything that goes with kissing.”

The other girl, identified as the victim of four of the assaults, told investigators she began a sexual relationship with Follen during her volleyball season last fall, the complaint said.

The girl told investigators that one of the assaults occurred in Follen’s classroom during a Saturday basketball tournament at the high school in December, the complaint said.