A teacher already arrested twice for allegedly having sex with two students has been accused of having improper contact with two other teens. 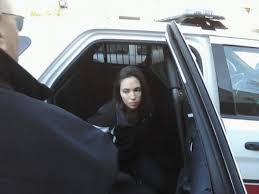 Lauren Harrington-Cooper was jailed back in December and then again in January after the former Plymouth, Pa. teacher at Wyoming Valley West High School was accused of having sex with 18-year-old and 17-year-old students.

Now, the Citizen Voice reports, the married educator is accused of making inappropriate contact with two other teenagers, one of whom was her former student.

Arrest records obtained by the paper said Harrington-Cooper had “sexually suggestive conversations” with her 16-year-old former student and that he eventually introduced her to a 17-year-old student with whom she had “sexually explicit conversations.”

The alleged texts and phone calls carried on from October, 2012 to after Harrington-Cooper was arrested in December, the documents said.

Harrington-Cooper denied the allegations despite prosecutors showing printouts of alleged texts sent by the former teacher, according to the Times-Leader.

The Citizen Voice details one alleged encounter between Harrington-Cooper and the 17-year-old:

In a previous story, the Citizen Voice detailed some of Harrington-Cooper’s alleged sexual encounters with two other students.

An 18-year-old boy told police he was introduced to Harrington-Cooper through his sister, after the teacher told his sister she thought he was “hot.”

Harrington-Cooper allegedly had sex with the 18-year-old twice and performed oral sex on him three times.

The caption for one photo read, “Loving every minute with my wonderful, beautiful wife, Lauren.”