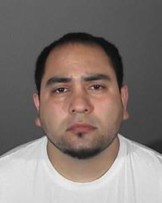 Albert Anthony Morales was taken into custody at his home in Diamond Bar and booked on sodomy charges, said Sgt. Richard Pena of the Sheriff’s Headquarters Bureau.

The assault occurred in the summer of 2006 when the victim was attending Sunny Hills High School in Fullerton, Pena said.

Morales has been tutoring band students for the past 13 years and had taught or volunteered in Los Angeles and Orange counties as a percussion teacher.

This article originally appeared on diamondbar-walnut