A teacher in France has been suspended after allegedly asking pupils to write an essay from the viewpoint of a suicidal teenager, officials say.

The pupils, aged between 13 and 14, were told to imagine reasons for wanting to end their lives and describe their self-disgust. 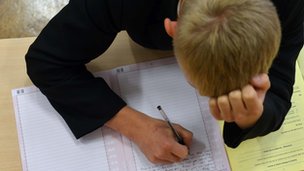 Angry parents contacted the national education department and sent a copy of the assignment brief to a local paper.

“The wording is beyond shocking,” an investigating government official said.

The incident took place at the Montmoreau-Saint-Cybard secondary school in the Charente region of western France.

The teacher could face disciplinary actions for the essay question, said Jean-Marie Renault, a regional director for the education ministry.

“If the facts are proven to be accurate, I cannot let this pass. Yes, there could sanctions. The teacher will have to explain herself.”

Shocked parents had written to local newspaper La Charente Libre to express their outrage over the assignment, which was given to the students on 22 October.

“We are disgusted that someone would give this type of topic to children who are between 13 and 14 years of age,” they told the paper.

“We are not in the habit of questioning what happens at school, but there are limits. What will be the next topic? ‘How do you feel when you shoot up drugs?'”

The president of the local parents’ association said the essay “almost encourages” children to take their own lives.

This article originally appeared on bbc