Los Angeles schools chief John Deasy blasted state lawmakers Thursday for not passing a bill to speed up the teacher-dismissal process, which he and others pushed following the sex-abuse scandal at Miramonte Elementary School.

The bill fell one vote short of clearing an Assembly education committee when six of the seven Democratic members either opposed it or abstained. Committee Chairwoman Julia Brownley (D-Oak Park) supported the bill, as did four Republican colleagues. 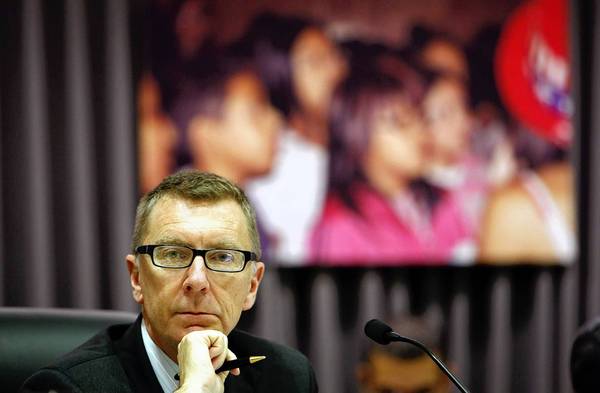 The measure would have allowed school boards to immediately suspend without pay a teacher or administrator notified of dismissal for “serious and egregious unprofessional conduct” involving sex abuse, drugs or violence toward children.

“It is shameful,” Deasy said of the panel’s decision. “It seems a no-brainer bill that would allow districts an expedited way, with full due process rights, to fire teachers who have committed the most heinous acts.”

The bill was vehemently opposed by the California Teachers Assn., United Teachers Los Angeles and other labor unions, which called it an attack on due process rights.

“We teachers, above everyone else, want to be sure that if there are bad people in the classroom abusing the trust we have been given, that they are not in the classroom,” Fletcher said. “But we want to make sure we are doing it the right way.”

State Sen. Alex Padilla (D-Pacoima), who wrote the bill, disputed accusations that it would violate due process rights. Employees would retain the rights to a full hearing, to appeal the decision, to file a wrongful-termination claim and other legal protections, he said.

He said the bill would have ensured that school board members had the power to act swiftly in removing educators who prey on children. The current process is so time-consuming and expensive, he said, that L.A. Unified School District chose to pay $40,000 to Mark Berndt, the former Miramonte teacher charged with 23 counts of lewd acts on children, to retire rather than take him through the dismissal process. (Berndt has pleaded not guilty to the charges.)

Had there been a speedier process, L.A. Unified might have pursued Berndt’s dismissal rather than pay him to retire, according to Alex Molina, the district’s chief labor and employment counsel.

“I believe the district would have stuck to its guns and seen the process through,” Molina said.

He said state data show that the formal dismissal process is infrequently used, suggesting that other school boards also find the process too cumbersome. Among the state’s 1,000-plus school districts and hundreds of thousands of teachers, only 667 dismissal cases were filed with the Office of Administrative Hearings between January 2003 and March 2012, Molina said. Only 130 actually went to hearing, and 82 resulted in dismissals.

UTLA’s Fletcher said the bill would not make the process cheaper or speedier. Employees would still have the right to appeal, prolonging the process and raising the expense, he said. And even if districts incurred substantial legal fees, they could recoup the costs under laws requiring reimbursements to local governments for carrying out state mandates, he added.

Williams, the only abstaining member to return a call for comment, said he probably could have supported the bill if it had been restricted to sexual abuse cases. But he said a teacher should be on the review panel in some cases, such as alleged violence, where experience with campus conflict could provide useful expertise. He also said not all school boards — some of which are appointed rather than elected and represent tiny districts — could judge dismissal cases better than the now required three-member panel.

Asked about allegations that the bill’s opponents placed teachers’ job security over children’s safety, Williams said he supported another measure on the dismissal process opposed by the California Teachers Assn. That bill, which passed the Assembly education committee in April, would eliminate the ban on use of evidence against educators that is more than four years old and remove the prohibition on starting the dismissal process during the summer. Both provisions were also contained in the Padilla bill.