A Fulton County Charter School teacher is expected to turn himself in early next week on several sex-related charges.

The 32-year-old man is accused of kissing a Hapeville Charter Career Academy student in his classroom during the last week of school.

The 16-year-old girl’s father has been working with authorities and tells Channel 2’s Tony Thomas he’s trying to keep his emotions in check. 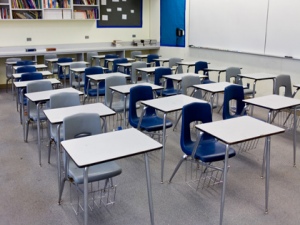 “Disappointed, surprised, angry; all those emotions you would think you’d have.” said the father, who asked to remain unidentified for his daughter’s protection.

He says he learned in mid-May about the alleged after-school kiss.

Thomas obtained a police report from Union City Police which states on May 16, the girl reported to a counselor that two days before, the teacher shut the classroom door and kissed her.

He then allegedly tried to keep it all quiet, texting her: “so obviously keep what I told you between us, once anyone knows it will get us in serious trouble. Trust no one.”

The father won’t say if what type of previous contact or communication the two may have had.

Union City Police now have warrants for sexual assault against a person in custody, and sexual battery. Both are felonies.

They also have a warrant for simple battery which is a misdemeanor.

We are not identifying the man since he has not been officially charged with any of the crimes.

Thomas left messages for the teacher on his cellphone, along with a text message and email, but did not receive a reply back.

No one from the charter school returned messages, either.

Authorities say the man is out of state at a family function and, through an attorney, has promised to turn himself in early next week.