Timothy D. Lawson, a 35-year-old Las Vegas resident, has been charged with one count of open or gross lewdness and one count of indecent exposure stemming from incidents in June 2011, according to a criminal complaint filed last month. He was a teacher and assistant wrestling coach at Cimarron-Memorial. 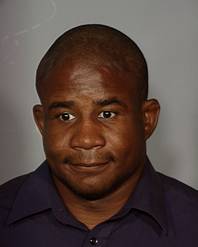 The second caller provided detectives with enough information to create a composite sketch of the suspect, according to the arrest report.

As police investigated, they recalled a similar pattern of incidents in 2007, which led to Lawson’s arrest in connection with seven events, according to the arrest report.

“The court hearings resulted in all cases being associated together and Lawson pleading to two disorderly conduct charges with counseling,” the arrest report states.

Detectives also interviewed Joe Caruso, principal of Cimarron-Memorial, who said school police only recently became aware of the 2007 charges against Lawson despite a background check during his hiring process, according to the arrest report.

Lawson was at home on paid leave at the time of his arrest Friday, but it’s unclear when he was put on leave. A School District official didn’t know the exact date when asked Tuesday.

Police contacted Lawson March 17 and questioned him about the string of incidents, in which he denied involvement, the arrest report states. During the interview, Lawson told detectives he was on suspension from the school district for “unknown reasons,” according to the arrest report.