The mother of an alleged victim of former Modesto high school teacher James Hooker spoke out against him on Tuesday night and said she hopes her daughter’s actions help put a stop to him.

Hooker, 41, is accused of sexual assault of a minor 14 years ago. That now 31-year-old woman’s mother spoke to CBS’s Sacramento affiliate on Tuesday night, saying her daughter saw coverage of Hooker on TV and “she felt it was time to say something.”

Hooker made national news earlier this year when he left his wife and three children and moved into an apartment with one of his students, 18-year-old Jordan Powers. Powers moved out of that apartment and left the state after Modesto police arrested Hooker on Friday. 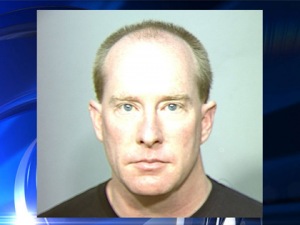 “He’s lucky I didn’t know what he did back then,” the mother said.

Hooker is accused of sexually assaulting the girl back in 1998 when Hooker taught at Davis High School in Modesto and she was a student at Beyer High School, also in Modesto, and they met at a Future Business Leaders of America conference in Irvine.

She said the two later “made out” several times and that he performed oral sex on her at his mother’s house, where he was living after moving from Fresno for the teaching position.

In an affidavit released Tuesday, Stanislaus County authorities revealed the developments that led to Hooker’s arrest on one count of oral copulation with a minor under 18.

“My daughter is a very brave, courageous girl,” the mother said as she nearly broke down in tears. “She’s very compassionate, and she did what she felt was the right thing.”

The mother said her daughter is concerned there could be other victims out there.

Hooker went before a judge for the first time Tuesday and was told to surrender his passport after prosecutors say they found a notebook of his that detailed plans to flee with Powers to Canada.

After Hooker’s arrest, Powers said her relationship with him is over.

However, her mother, Tammie, said Hooker is still trying to contact Jordan. Tammie was disappointed that the judge is allowing Hooker to leave the state while out on bail. “He’s able to travel,” she said after Tuesday’s court hearing. “My daughter is out of state and he’s still pursing her, calling her.”

As for the 1998 incident, he claims she came on to him while naked and that he touched her briefly before getting scared and walking away from the situation.

Hooker’s bail was set at $50,000, which he paid shortly after midnight on Saturday.