(Memphis) The Excellence Academy is a small private school. It’s so small it leases space at the Greater Imani Church in Raleigh.

The church has no affiliation with the school other than landlord.

But the small school is making big news after this week’s  arrest of teacher Aaron Thompson.

Police say Thompson, who was supposed to be teaching kids, was having sex with one of them.

The 14-year-old told police she was being sexually abused by Thompson, saying most of the sex acts occurred during her 8th grade year at The Excellence Academy, where Thompson taught. 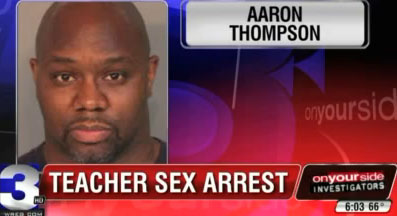 She says it started two years ago when Thompson was her teacher.

According to the 14-year-old, it began with his inappropriate touching and then escalated.

“I am just appalled. I just can’t imagine such a thing,” says one of Thompson’s neighbors.

Those who live in Aaron Thompson’s Raleigh neighborhood can’t believe it.

They say the nice father of two never-never showed any signs of problems.

” He always seemed mannerly and nice, never anything unusual,” says a neighbor.
But according to the teen,  the very sex acts Thompson is accused of happened at his home.

News Channel 3 has learned it was another student’s parent who happened to look at the 14 year old’s cell phone and saw text messages from Thompson.

The Attorney for the Excellence Academy says the school did a background check before hiring Thompson, but nothing came up.

We found some traffic offenses and an unexplained fugitive from justice charge in his records.

We are told The Excellence Academy now plans to re-do all of its background checks in light of this incident.

The school has about 40 students and 5 or 6 teachers.

But Aaron Thompson is no longer one of them.