Orland, 42, of North Aurora, was defiant and unapologetic before being led away in handcuffs from the Kane County courthouse.

In May 2011, Orland was charged with 27 counts, including battery, sexual assault and sexual abuse of two students. The indictment alleged the encounters were consensual but that the students’ age and Orland’s position of authority would make the contact illegal. The victims were 17 years old during the initial sexual contact, police said.

Prosecutors said Orland, who knew the girls since they were freshmen, sent them thousands of texts and dropped notes and letters in their lockers during school. In pleading guilty, Orland admitted that he arranged to meet the girls in a band storage room on separate occasions, where he abused them. He was caught when another teacher opened the storage room door and found Orland with one of the girls. 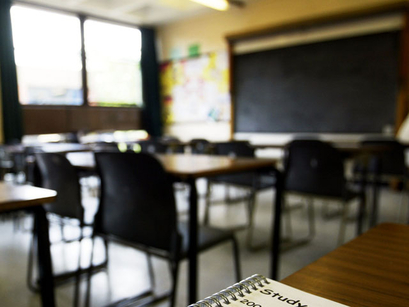 As part of the agreement, the other charges against Orland were dropped, including allegations that one sex act was performed in a minivan on a side street near West High after a band concert, according to court records.

After agreeing to the plea deal, Orland read from a lengthy statement entitled “For that I am grateful.” The statement listed Orland’s many accomplishments as a teacher and band director. He also thanked the family and friends who have supported him — including the dozens who gathered in the courtroom Friday. After each section, Orland repeated the phrase “for that, I am grateful,” as if it were a refrain from a musical composition.

At no point in the statement did Orland apologize for his actions or to the victims. He did admit Friday was a difficult day and that he was experiencing a “wide range” of emotions.

Orland listed off accomplishments from almost two decades teaching in the West Aurora School District, including serving on a Positive Behavior Intervention committee. He highlighted the influence he has had on hundreds of students. He said his binders of thank-you notes are proof that he has made a difference to many young musicians.

“The band room was the second home and that’s what it was: a safe place to be,” he said.

Orland said it was “such a joy to lend a hand” in various community activities, including coaching baseball and serving on the PTA.

He said his latest experience has brought him closer to God. Orland pointed out that he has been a religious education teacher for more than 16 years.

“God is walking with me and my family through this,” Orland said.

He praised the beauty and courage of his wife, who he called his “soul mate.”

“That love connection that we share has never been stronger than it is today,” he said.

Judge Allen Anderson did not seem to share Orland’s assessment of his career. Anderson said that while Orland may have helped many students, his other actions have serious consequences.

“You have disgraced your profession and you have weakened the trust parents have in the educational system,” Anderson said. “You cannot undo the damage you have done to your victims in this case.”

After the hearing, Orland’s attorney said the former teacher does regret his actions.

“He’s sorry for the entire matter, for the entire incident,” attorney Phillip Nathe said. “It may not have come across in his statement, but he’s very sorry.”

Kane County Assistant State’s Attorney Pam Monaco said she was glad to spare the victims the pain of testifying, although she was prepared to take the case to trial. Prosecutors felt they had a strong case against Orland.

In January 2011, while on a band trip to Peoria, Orland sent one of the girls text messages to the effect of “I want to kiss you right now” and “I want you now”, according to court records. No sex acts occurred during the trip, although the girl apparently went to Orland’s hotel room at some point, the records show.

In May 2011, after the investigation began, Orland met with one of the girl’s friends. During that meeting, he said “We cannot let the girls testify against me,” according to court records.

At unspecified times, Orland told one of the girls “if (she) really loved him, she would not testify” and also commented his “life would be over” if the girls testified, according to court records.

Orland offered to pay for musical instruments and tutors, while reassuring “each victim that their relationships would not be discovered”, according to court records.

Orland will have to register as a sex offender for life.