A number of language instructors, and the broker ring which found them their hagwon jobs, have been caught for faking academic backgrounds. What’s shocking is that among them is a gang member who committed serious crimes in the US.

The Seoul Police International Crime Division Lab on the 8th arrested 2 unqualified instructors who faked their academic backgrounds in order to work, including 38 year old Mr. Kim, for document forgery, and issued warrants for three others, including 29 year old Mr. Lee, for the same offense.

Mr. Kim is accused of taking money from Korean Americans wanting to work as native speaking instructors but who lacked the qualifications, forging academic credentials and introducing them to language hagwons. 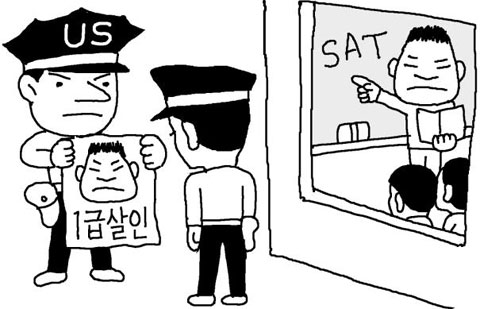 The police investigation found that Mr. Kim paid a fake degree website $100-200 USD to produce fake US university degrees and these were used to get hired by language hagwons or private middle schools.

As well, Mr. Lee served time in a Korean prison for selling marijuana and afterwards used a fake degree to work as an instructor.

It’s been found that most of them were either adopted to or emigrated to the US as children, joined Korean American gangs, served time in the US for crimes such as second degree murder, kidnapping or rape, and were deported to Korea.

On weekends they would meet in Itaewon and habitually take drugs like marijuana.

A police official said, “There is great concern that children may be negatively influenced by native speaking instructors who have been recklessly hired in accordance with the social atmosphere of the English education boom.” “There is a need for authorities and hagwons to strengthen the screening of teachers’ backgrounds.”

Police said that there are reports that the Gangnam area has more unqualified native speaking instructors who have faked their backgrounds working their and will expand their investigation, while at the same time strengthening information gathering on people who smuggle drugs to Korea like Korean Americans and overseas students.

NoCut News issued this report – helpfully titled “Native speaking teachers turned out to be murderers, gangsters, rapists and kidnappers in the US” – with more information. (I want a t-shirt with that written on it.)

The Mr. Kim mentioned in the first article was sentenced to 10 years in prison in Arizona for second degree murder (accidental murder) involving a shooting, and after being deported to Korea found shelter at a religious group in Yeongdeungpo and started forging after meeting another deportee there.

Among those who Mr. Kim sold degrees to was another Mr. Kim (42), who was sentenced to 10 years in California for kidnapping and rape. And Mr. Lee, a public service worker, was sentenced to two years in prison in the US for selling marijuana and illegal firearms possession, before being deported to Korea, where he served time for selling marijuana around Sinchon before faking his background to work as an unqualified hagwon instructor.

I’m going to assume that, since they were all deported from the US, they are all Korean citizens, hence the difficulty in learning the truth about them since, working in hagwons, they are [were] not required to submit criminal record checks. The thing is, even if the new hagwon regulations apply to F visa job applicants, they still wouldn’t apply to Korean citizen ‘native speakers,’ since the law specifically refers to the criminal record checks and drug tests being required only of non-citizens.

Usually gyopo gangster murderer arrests lead to interesting cartoons; perhaps we can expect something new to add to what we already have?