Gym teacher jailed for 20 months over two-year affair with student, 15, who says it ruined his life

A former gym teacher was sent to jail on Friday, after she was found guilty of engaging in a sexual relationship with one of her 15-year-old students for two years.

Tania Pontbriand, 43, initiated the relationship in 2002, with one of her male students at Rosemere High School in Quebec, Canada. 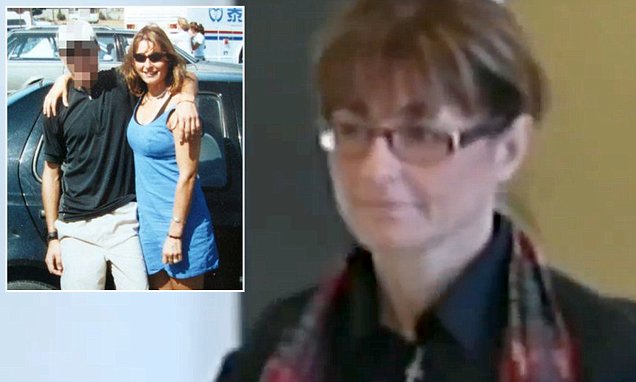 The victim came forward with the relationship in 2007, and charges were filed a year after that.

Bad romance: Tania Pontbriand (right) was sentenced to 20 months in prison on Friday for carrying out a two-year sexual relationship with a 15-year-old student (face concealed on left), starting in 2002

Mother: Pontbriand (pictured walking into court) hoped to get a lighter sentence since she didn’t want to be separated from her two young children

He says he became depressed after they broke up, and it caused him to flunk out of university.

Pontbriand was mostly controlled in court on Friday, as she was sentenced to 18 months in prison for two counts of sexual exploitation and 20 months for one count of sexual assault. The sentences will be served concurrently and she will be on probation for two years after that

But she started to cry when the judge refused to grant Pontbriand’s request to report to jail in a week so she could say goodbye to her two young children.

Instead, she was remanded straight to prison, as about 10 family members watched.

The judge wrote in a 150-page decision that Pontbriand’s sentence reflected the fact that she betrayed the trust society places in teachers.

School grounds: The victim was one of Pontbriand’s male students at Rosemere High School in Quebec, Canada

‘Students, parents, authorities and society have the right, not the privilege, to have full trust in their teachers in their roles of educating and instructing children and adolescents,’ the judge wrote. ‘During the day, these teachers, in exercising their duties, continue the role of parental authority.’

The judge added that it doesn’t make a difference that Pontbriand is a woman, and her victim a male.

The victim, now in his 20s, said in a statement in June that Pontbriand alienated him from his family and friends ‘so as to satisfy her own egotistic and sexual desires’.

‘I was far too naive at the time to recognize her lies and manipulation,’ he wrote.

Impact: The victim, now in his 20s, said in a statement that he and Pontbriand had 200-300 sexual encounters and that he became depressed when they broke up, flunking out of school

He said they had about 200-300 sexual encounters during the two-year affair, which were carried out at her home, in her car, in her office at his home and other locations.

The victim says the relationship had disastrous effects on his life, causing him to become depressed and drop out of school.

She argued for a lighter sentence, saying the case has already impacted her two young kids since she lost her job and reputation.