Jurors on Friday returned a guilty verdict in the trial of a former Lee High School math teacher accused of molesting a young girl multiple times a week over the course of two years. 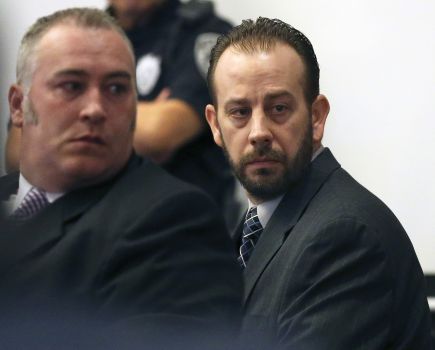 Adam Paul Eannarino, 35, now faces 25 years to life in prison for the continuous sexual assault of a child conviction. State District Judge Maria Teresa Herr will decide the punishment at a later date.

In graphic detail, the now-13-year-old girl — who was never a student of his — told jurors Thursday how Eannarino threatened to kill her family if she told anyone about the abuse.

The girl testified that Eannarino would bind her with Velcro handcuffs or zip ties and make her watch pornographic videos as he instructed her on what to do.

Eannarino also took the witness stand Thursday and again of Friday, denying the accusations. There was no physical evidence to give any credence to the allegations, defense attorney Stephen Foster said.

Multiple colleagues and former professors previously told jurors that the allegations against Eannarino didn’t mesh with the man that they knew. He was a hardworking, dedicated teacher who cared about his students, they said.