The trial for a former middle school principal charged with sexual assault and other crimes started this week in Sitka.

Opening statements were held in the case against Joseph Robidou, a former principal at Sitka’s Blatchley Middle School, who faces five counts of sexual assault, four counts of indecent exposure and one count of assault, the Daily Sitka Sentinel reports. 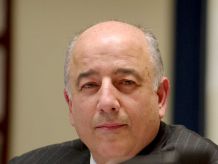 The incidents allegedly happened over a one-year period ending in January 2013 at the school and at the home of two of the victims. Officials said students were not involved.

She alleges Robidou went to the home of one victim on Jan. 16, 2013, and placed his hands around the woman’s neck.

Seaton alleges Robidou said to the woman, “This would be easier if you were passed out.”

It was during the investigation, Seaton said, the teacher claimed other incidents of unwanted sexual contact from the principal. Investigators then spoke to every female employee at the school, which resulted in two other instructors coming forward.

His attorney, Julie Willoughby of Juneau, countered in her opening arguments Wednesday that all four people involved were part of a party culture of Blatchley employees, which she referred to as “the drinking club.”

She also suggested the allegations might be a form of revenge by one of the women. She said the woman has a “wicked” sense of humor and temper, along with a reputation of being untruthful.

Willoughby concluded that all those involved may have exhibited poor behavior, but it wasn’t criminal.

“Bad behavior, abhorrent behavior, is not necessarily a crime,” she said.

The first witness called was a woman who came forward during the investigation, and is the basis for three charges, one count of indecent exposure and two counts of sexual abuse.

The woman said she did socialize with Robidou and other employees outside school, and claims he exposed himself to her at her home.

On cross examination, the woman acknowledged kissing Robidou in the teacher’s lounge but said she didn’t initiate it. She also denied any other sexual contact with him, but did say she didn’t remember specific events after she went to his home in 2011 after a night of drinking.

When asked by Seaton, the woman replied that by accompanying Robidou to his home was not consent for further physical contact.