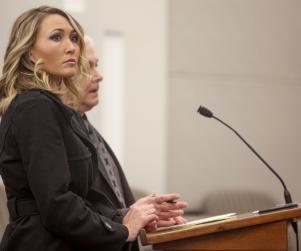 Brianne Altice, 34, teaches at Davis High School, in the Mormon community of Kaysville. She was arrested in October for an alleged sexual relationship with a minor.

She appeared in court for her arraignment Thursday wearing high heals, a tight-fitting shirt and slim pants.

The victim, now 17, told investigators in November that he had sex with Altice on three occasions in 2013.

He said he was unhappy that his parents moved to Utah from another state. He claims he started doing drugs and skipping class to hang out with Altice.

“The defendant occupied a position of special trust in relation” to the juvenile, prosecutors wrote.

She allegedly had sex with the teen in her home and in a church parking lot.

Police say the teen was able to specify tattoos and where they were on the teacher’s body.

Police said there may be other potential victims.

Altice began teacher in the district in 2004. She was a prep time specialist at Wasatch Elementary. In 2005, she began teaching English at Sunset Junior High. In August 2012, she was hired at the high school.

Altice’s husband filed for divorce in November and she has been placed on administrative leave from her job.

Judge Thomas L. Kay scheduled a jury trial for May 12.