A Southern California school administrator who quit her job after a former student aired sexual abuse allegations on a YouTube video that has since been seen nearly a million times was charged Monday with 16 counts of sexually abusing two girls, prosecutors said. 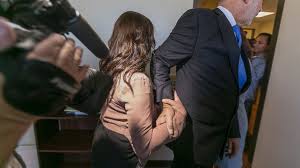 Andrea Cardosa, 40, was charged with five counts of aggravated sexual assault on a child and 11 other counts of abuse and could get life in prison, the Riverside County District Attorney’s office said. She was arrested by deputies in the city of Perris soon after the charges were filed, and was expected to be arraigned Thursday, district attorney’s spokesman John Hall said.

Cardosa’s lawyer, Randy Collins, said after charges were filed that he couldn’t immediately comment because prosecutors hadn’t informed him yet. In a second attempt to reach him after the arrest, Collins’ phone was not accepting messages, and he did not immediately reply to an email message.

The case came to light after a now 28-year-old woman posted the video on YouTube Jan. 17 showing her making a call to confront Cardosa about the abuse allegations that she said began when she was 12 and Cardosa was her basketball coach.

The video also was sent to the Alhambra Unified School District, where Cardosa was working as an assistant principal. The superintendent immediately referred the case to police, and Cardosa resigned the same day.

The video was viewed nearly 1 million times just days after it was posted on YouTube, and a second alleged victim later came forward.

Because the five aggravated sexual assault charges carry a life sentence, the statute of limitations does not apply though the alleged crimes took place between 1997 and 2001, district attorney’s spokesman John Hall said.

Fifteen of the counts stem from allegations of abuse against the woman, named Jamie, who posted the YouTube video, and one stems from abuse allegations related to the second woman, named Brianna. Both women asked to be identified by their first names, and the Associated Press is not using either woman’s full name because they say they are victims of sexual abuse.

In it, Jamie phones Alhambra High School, where receptionists connected her to a woman who identifies herself as Cardosa.

“You should be so ashamed and so disgusted with yourself,” Jamie says.

Jamie does not give specifics of the alleged abuse in the video.

School district officials said Cardosa was hired in October after she passed criminal background checks and came with a clean record from her previous employer.

Brianna, who is now 18, said Cardosa befriended her mother while Brianna was a student at Tomas Rivera Middle School in Perris in 2010.

She then “groomed” Brianna by giving her movie tickets, candy bars and lunch trips and calling her special, then made several sexual advances, inappropriately touching her and abusing her, according to a legal claim filed by her attorney.

Cardosa could not be reached for comment in several phone and email attempts by The Associated Press last month.

Jamie said she came forward because her daughter is about the age she was when the abuse began and she wanted to prevent other kids from being molested.

Jamie’s lawyer, David Ring, told The Associated Press last month that Jamie made “a spur of the moment decision” to call the woman after searching for her name on the Internet and discovering she still worked with children.

“She was incredibly bothered by the abuse for a long time,” he said.