A judge decided there is enough evidence for a trial, in the case of an Omaha teacher accused of sexually assaulting a student. 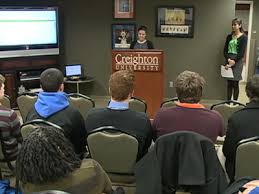 Twenty-eight-year-old Ty Warner was bound over to district court by Judge Jeffrey Marcuzzo for the alleged sexual contact of a 14-year-old female student and tampering with evidence.

At Warner’s preliminary hearing on Wednesday, Omaha Police Detective Chad Kavars took the stand and testified that the victim came into Project Harmony in late November and brought with her notes she claims were passed between her and her math teacher, Ty Warner.

According to Kavars, the victim was in Warner’s homeroom and he was her teacher for five periods per day at Alpha School in Omaha.

From those seven notes in the victim’s math notebook, Kavars says he was able to place the alleged sexual contact in mid-November.

The victim told the detective about one incident where Warner escorted her to the restroom and inside, they allegedly shared an open-mouthed kiss.

She told the detective that when she was having a “bad day,” she or Warner would pull her desk back to his, behind the file cabinets, and on five occasions allegedly fondled her private parts. According to the detective, the sexual contact happened on several occasions.

The alleged contact came to the attention of teachers and police when a friend of the victim tipped off teachers.

Kavars testified that another teacher found the notebook and confronted Warner about it. According to Detective Kavars, Warner reportedly told the teacher to “destroy it.”

Jim McGough, Ty Warner’s attorney, cross examined Detective Kavars in court Wednesday and pointed out that the victim had a history of lying, according to one teacher. Kavars said the student had never claimed to have sex with other teachers or accused one of inappropriate contact.

McGough also noted that the notes in question never mention any sexual contact between the victim and the suspect.

McGough brought out that there are multiple supervisors in the hallways and two teachers in every classroom during the school day and none of them were not interviewed by police detectives.

“With all the technology we have today, we can put someone in prison for a very long time with just a statement. Unfortunately the justice system is still stuck in that phase,” said McGough.