A Texas teacher accused of having a sexual relationship with a student last year has been fired from her position with the Wharton Independent School District. 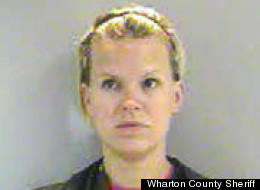 Brooke Lynn Domel, 32, who taught elective classes such as landscape management and floral design at Wharton High School, first came under investigation for the alleged 2012 relationship in May of this year.

According to NBC Houston affiliate KPRC, Domel was arrested in the school parking lot the morning of July 1, after new information came to the attention of police.

Although she was subsequently placed on administrative leave, Domel’s contract with the school had already been renewed for the 2013-2014 school year by the time she was arrested.

In an executive session of the school board Tuesday night, the new district superintendent King Davis recommended that Domel’s contract be terminated. The board voted to let her go. It was Davis’ first action as superintendent, according to the Wharton Journal-Spectator.

Domel, a married mother of two small children, is accused of an inappropriate relationship between educator and student, a second-degree felony. Her attorney, John Maher, told the newspaper that his client “doesn’t understand why she was arrested.”

Regardless, the police continue to build their case. In a separate Jounal-Spectator report, a Wharton County Sheriff’s spokesman said the alleged sexual contact between Domel and the student, who graduated in June, happened more than once, but not on school grounds.

“It’s alleged to have occurred on more than one occasion,” Sgt. Raymond Jansky told the newspaper.