Grant Davies, 39, who founded the dance studio RG Dance in the city’s inner west, appeared in court yesterday, charged with the aggravated sexual assault and indecent assault of a 12-year-old boy. The teacher, who has worked with hundreds of children, also faces charges of producing child abuse material and grooming two girls, aged 13 and 14, for unlawful sexual activity. 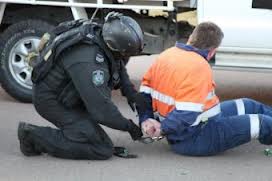 Mr Davies’ parents were in Burwood Local Court to when magistrate Christopher Longley refused him bail, saying he was concerned about the possible risks if the accused were released. “This offence comes under the broad description of pedophilia,” he said.

“Persons who are in this unseemly behaviour towards children, it’s not as if they’re a tap that can be turned off.” Prosecutor Rachel Swift told the court Mr Davies’ reflection could be seen in some of the many photographs he had taken of his students, which included girls in “sexually suggestive and provocative poses”.

“The police investigation is very much in an early stage, there’s still a lot of investigation to be done,” Ms Swift said. “There are hundreds . . . of photographs on his computer. There are lots of other victims that are yet to be identified.”

Mr Davies’s lawyer, Phillip Gibson, said his client had no criminal history and had been prepared to surrender his passport and report regularly to police, if bail were granted.

Some of the evidence against the dance teacher, who appeared in court by video-link, was not strong, Mr Gibson said.

Mr Davies’ parents were prepared to offer $300,000, secured on their own home, to guarantee his bail, the court was told.

Discussions about removing the teacher from the staff of the dance studio, which also employs his sister and mother, were under way, Mr Gibson said.

Police documents tendered reveal Mr Davies is accused of having oral sex and sexual intercourse with a 12-year-old boy about a decade ago.

He has also been charged with producing and disseminating child abuse material, specifically photographs of naked girls, which were found on his home computer.

This article originally appeared on theaustralian