Parents from a school in Northeast Baltimore are asking why a man who is now charged with raping a 15-year-old girl was he allowed to be alone with their children.

That suspect — Shawn Nowlin — was a temporary contractor at Hazelwood Elementary and Middle School. 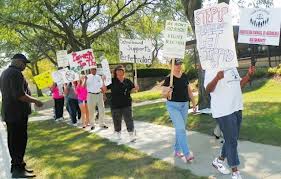 Parents, who met with school officials Thursday night, say Nowlin met with and counseled students — even handed out discipline in the form of suspensions.

“He wasn’t a hall monitor,” said parent Vivian Lee.  “They keep saying he is, but he wasn’t that. No he wasn’t.”

“Hall monitor” — “Temporary support employee” — no one, parents or school officials — seem to be sure just what Shawn Nowlin’s job was.

Now he faces criminal charges in Harford County, where police say he had a sexual relationship with a 15-year-old girl.

Charging documents in the case indicate the girl is pregnant with his child.  Nowlin worked at Hazelwood for two more days even after the arrest last week.

When the arrest finally came to light, so did the confusion over what Nowlin’s job was supposed to be.

“They don’t know what this man was. And he was allowed complete access to children,” said Hazelwood parent Erica Hamlett.  She says the man who signed his letters “Doctor” Nowlin “diagnosed” the boy with depression.

“This man had been the go-to person here. When I was having issues with my son and his math teacher, he sat in on the parent-teacher conference,” she said.

No cameras were allowed inside the meeting, but the parents we spoke with say they’d come for answers on how Nowlin was allowed to be in their school..

Instead, Vivian Lee said the meeting:  “Agitated me. Agitated me because he’s doing (City schools CEO) Dr. Alonso’s junk instead of Alonso coming down here to see what’s going on in his building and cleaning it up.”

Jonathan Brice, he school official in charge of the meeting says an investigation into what happened is going on, but he could not directly respond to the parents.

“City Schools is certainly looking into this matter. It would be inappropriate for me to comment on it given the pending legal aspects of this situation,” Brice said.

The administrators did say they’ll be bringing in support teams to try and explain the situation to the children who dealt with Nowlin at Hazelwood Elementary and Middle School.

Nowlin faces charges of second-degree rape, sex abuse of a minor and second degree assault.  He’s free on bail and he has a preliminary hearing scheduled for later this month.