Disruption: Math teacher David Pecoraro was being investigated for corporal punishment after he allegedly spit at a male student who returned the gesture at the New York school 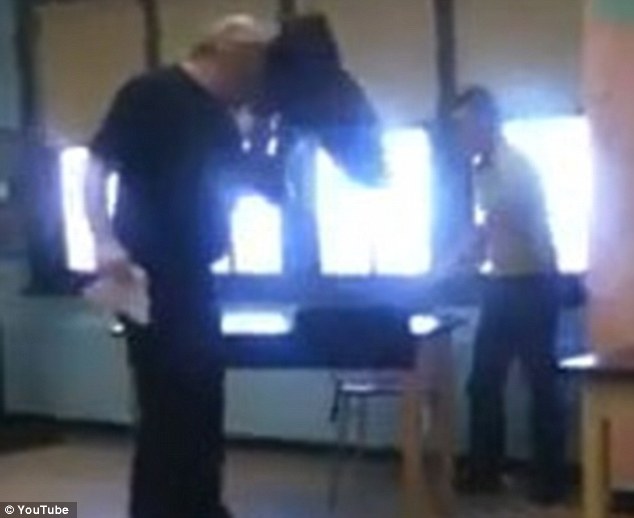 Confrontation: Math teacher David Pecoraro was filmed having a heated, and at times physical, argument with a student at Beach Channel High School in New York

Pecoraro is being investigated on allegations of corporal punishment.

The teacher, who has been in the profession for 19 years, can be heard saying in the clip: ‘You can’t make contact with me, that’s illegal.’

He then tries to explain a math problem to the student who is ignoring the lesson and covering his head with a jacket.

At one point, the student, whose identity isn’t revealed, appears to try to hit the teacher.

Pecoraro then tells the teenager: ‘You’re going to go to jail, you don’t touch me… I want to teach you math.’ ‘Reassigned’: David Pecoraro was being investigated after a row between the teacher and a student got out of hand

The altercation is witnessed by a few other students in the class – along with one boy in front of the camera who is asleep with his head on the desk.

The row continues until the teacher appears to spit at the student who then spits back at him.

The grainy film cuts out after Pecoraro can be seen dragging the student out of his seat.

The teacher, who reportedly earns $100,000 a year, defended himself after the incident.

However Pecoraro told the New York Post: ‘The kid put gum he had tried to put on my rear end that was already chewed and that was on his desk in my mouth – and I spit it out. Then he spit in my face.’

In the disciplinary guidelines for Beach Channel High School is states that: ‘Disruptive behavior by a student must never be punished by use of physical force.’ Making a point: Pecoraro leans over the teacher as he tries to make the boy listen to advice on the math problem he is trying to solve Violence: The student and teacher both appeared to have spat on each other during the incident at the high school in Queens
This article originally appeared on dailymail
Tweet