Teacher ‘grabbed child, five, by head and slammed it against desk’

A teacher has been stripped of her classroom duties after a protest by furious parents who discovered she had been accused of – but not prosecuted for – pushing a child’s head into a desk.

Accused Deborah Fergin-Mavaega, 51, was given a role outside of the classroom after families interrupted San Fransisco’s Sherman Elementary’s board meeting last week, complaining to district officials about her position at the school.

The furor began when Ms Fergin-Mavaega was transferred to the school in the first week of the new school year, replacing a fifth-grade teacher – but parents had not been informed about the change,SFGate reported.

But the row grew when already incensed parents learned that she had allegedly pushed a 5-year-old child’s head into a desk at Bret Harte Elementary School in 2009.

Ms Fergin-Mavaega has not faced criminal charges for the accusations.

The criminal charges against Ms Fergin-Mavaega, a district teacher since 1991, were dropped by prosecutors when she agreed to a pretrial diversion program, the website reported.

The child’s family were paid $30,500 by the district after they filed a civil lawsuit.

But after returning to the classroom in 2011, another Bret Harte pupil, 4, accused the teacher of grabbing her arm and bruising her.

The district and law enforcement investigated the incident and filed no charges, but a civil case is pending, SFGate reported.

District officials said there was no reason to sack the teacher or forbid her from the classroom.

Gentle Blythe, district spokeswoman, said in a statement reported by SFGate: ‘Teachers have a right to due process. An accusation does not establish guilt. 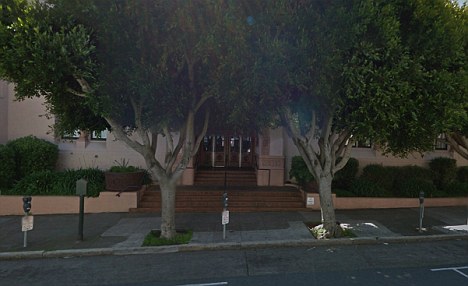 ‘SFUSD follows the requirements of the Education Code, the Commission on Teacher Credentialing and our contract with the teachers union in determining whether or not there are grounds for dismissing a teacher and/or removing a teacher from the classroom.’

But a letter sent to parents said she had been removed from the classroom and assured them the original teacher the accused Ms Fergin-Mavaega replaced will return to the class.

Union officials backed the under-fire teacher and branded the accusations of abuse groundless.

Susan Solomon, executive vice president of the United Educators of San Francisco, said that the teacher had been taken out of the classroom to suit everyone involved. ‘The teacher is being assigned to a nonteaching position … to do what’s best for the students and the teacher, which is to let the students get on with their education, and the teacher to perform needed work for the district.’

A lawyer for the children’s families disagreed.

‘I’m glad they took her out of the classroom. She shouldn’t be there,’ said Cheryl Ruggiero, the attorney for the plaintiffs in both civil cases against the teacher and district.