A Chinese teacher has been caught on video abusing her young pupils by repeatedly slapping and kicking them.

The teacher is seen slapping four children over 120 times when they fail to answer questions.

The disturbing 30-minute CCTV footage was recorded at a pre-school in Taiyuan, in the northern Shanxi Province. 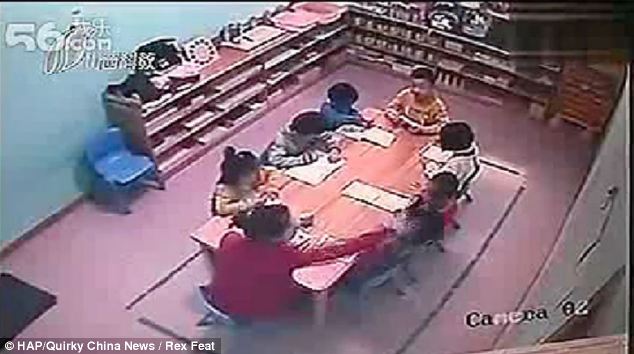 Teacher from hell: The female tutor slaps the child on her right and is caught on CCTV Abuse: The child’s head snaps backwards from the impact of the teacher’s slap

The incident came to light after the father of one of the little girls, only named as Mr Han, came home to find his daughter’s face red and swollen.

Mr Han visited his daughter’s playschool and demanded to see the CCTV tapes, which revealed the teacher abusing his daughter and three other children.

He said: Within a short half-an-hour she slapped my daughter 43 times and kicked her twice.’

Mr Han added that the teacher slapped the other children 43 times, 27 times and ten times respectively during the short clip. Hit: A little girl wearing a yellow top is slapped multiple times in the harrowing video Violent order: The female teacher grabs a little boy by his braces and shakes him hard Bad teacher: The teacher keeps a tight grip around the boy’s wrists as she pushes him away

Han said this was not the first time his daughter had returned from school with bruises on her face, but he had always assumed she had been injured while playing.

He added: ‘The teacher asked my daughter to add numbers more than ten. My daughter told her that she can’t solve it, and then the teacher slapped her.’

According to a Chinese news report, the teacher in question has been sacked from the pre-school.