Three teachers at Triton Regional High School in NJ have been arrested and accused of carrying on sexual relationshipswith teens—and two administrators at the school have also been arrested and accused of covering up the affairs. Teachers Jeffrey Logandro, Daniel Michielli and Nicholas Martinelli—all in their late 20s or early 30s—have all been charged with various sexual misconduct charges; the teens were all said to be 17 or 18 years old. “It’s obvious there existed a culture at Triton High School whereby teachers thought they could get away with improper relationships with their students and administrators turned a blind eye,” Camden County Prosecutor Warren Faulk said at a press conference. 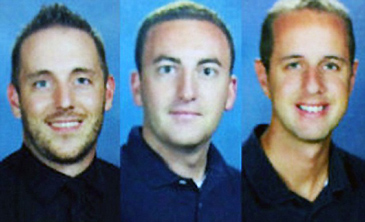 Math teacher Michielli, 27, is accused of having intercourse with a student multiple times during the school year. He is charged with official misconduct, sexual assault, endangering the welfare of a child and criminal sexual conduct. Gym teacher and boys’ soccer coach Martinelli, 28, allegedly touched and kissed the girl when she was a student and had intercourse with her after she graduated in June. Math teacher and girls’ track coach Logandro, 32, is charged with official misconduct, criminal sexual contact and endangering the welfare of a child. A court filing says he inappropriately touched a female student. One of the teachers was charged with sexual assault for having sex with a 17-year-old, but it isn’t clear which one that was.

In addition, Principal Catherine DePaul and Vice Principal Jernee Kollock have been accused of knowing about the allegations, not contacting authorities about it, and then helping to cover it up. Principal DePaul allegedly met with a non-victimized student who knew about the relationships; she had that student write an account of the situation that was made to sound less serious, with Vice Principal Kollock helping her write it. They have both been charged with official misconduct; all five face up to five years in jail.

This article originally appeared on gothamist