The arrest of a Harlem Middle School teacher on charges she had sex with a female basketball player while serving as a coach in Belvidere is unlikely to spark a significant change in teacher hiring practices.

Harlem School District Superintendent Julie Morris said Harlem already has stringent hiring process in place. This is the first time a teacher from a Harlem school has faced these kind of charges since Morris was hired as superintendent in 2007, she said. 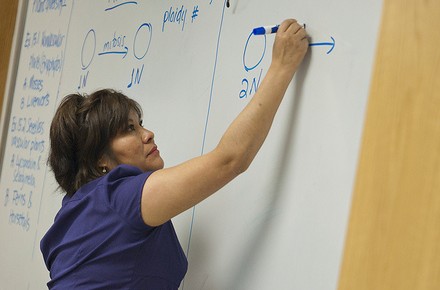 “I always want to review hiring practices and we do so on a regular basis,” Morris said. “But there is nothing in the hiring practice we would do differently because we have a very tight, very comprehensive hiring process. So I wouldn’t say this particular situation would warrant a revamping of that process.”

None of the allegations against her have been proven.

The alleged offenses occurred during the 2008-09 season, but were not reported to authorities until early August. Because they occurred in Rockford, the case was investigated by the Rockford Police Department.

The alleged victim was 17 years old at the time and Baney was her varsity basketball coach at Belvidere High School.

Criminal records are checked nationally by the FBI and the Illinois State Police.

In Harlem, teachers are interviewed by at least two members of the administration and references are checked in addition to the criminal background check.

Although relatively rare, teacher-involved sex crimes tend to be shocking because of the nature of the allegations and because teachers hold a respected position of authority over their victims, officials said.

Cost would be a question along with the validity and reliability of psychological testing.