A number of Valley schools started the school year with several substitute teachers.

CBS 5 News has learned that a number of districts were unable to get all their new teachers into the classroom on time because of a backlog in fingerprint background checks. 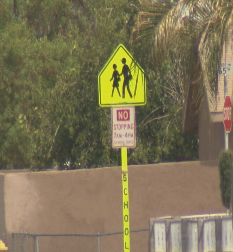 Meri Simmons with Phoenix’s Cartwright School District said that they had to hire 32 substitutes on the first day of school, because fingerprint background checks had not come back yet on many of the new teachers they planned to hire.

“Obviously our preference would have been for all our teachers to have their certifications in place and ready to be in classroom,” said Simmons, “but they weren’t, so we took steps to do the right thing for our kids.”

Cartwright is one of several districts across the Valley forced to use substitutes to start the school year because of a delay in teacher background checks conducted by Arizona’s Department of Public Safety.

DPS officer Carrick Cook said that they run background checks for more than 1000 entities across the state, including schools, hospitals, courts, day care centers, fire departments and other state agencies.

“Imagine a cubicle filled with milk crates and in those milk crates, they are completely filled with applications,” said Cook. “We haven’t hired anybody in that unit for four years. As an agency, our budget has been very restrictive and we’re looking at trying to do the best we can with what we have.”

Cook said they’re able to send back about 5000 background checks a week, but it still takes six to eight weeks to process each one.

DPS is aware that districts like Cartwright might want the reports back sooner, but they can only work so fast, Cook said.

“We’re not going to compromise our integrity and safety of whoever is on the receiving end of those cards,” said Cook.

DPS officials also said that the Cartwright School District needed to submit their background requests sooner if they wanted them all back by the first day of school.

However, DPS managed to speed up the process to help the district out.

CBS 5 has learned that all of those reports have now been completed, which means all of the substitute teachers are no longer needed.