Reader tip: While Weifang Changle County Chengguan Street 6-year-old Le Le was attending class at a kindergarten there, because she had talked during class, the teacher had the class of 29 children take turns punching Le Le 10 times each, causing a large bruise to appear on Le Le’s back. Up to now, Le Le is afraid to go to school, and the teacher who commanded the students to punch her hasn’t shown up since either. 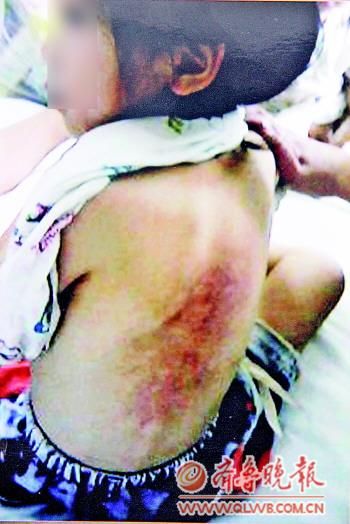 Under her mother and this reporter’s encouragement, Le Le described what happened. That day during music class, Ms. Bi was playing the piano on the platform. A classmate took Le Le’s eraser, Le Le asked him for it, but wouldn’t give it back. Ms. Bi came down off the platform, accused Le Le of talking in class, and ordered the whole class to hit her, 10 punches for each person. There were 32 children in the class and apart from two children who didn’t hit her, the other students all punched her 10 times each.

While this reporter was doing this interview, at 19:37 on August 6, the Changle County Police Bureau posted a message through their official weibo: “July 11, we received a report concerning kindergarten student Le Le was hit and injured. The district police station immediately dispatched police officers to investigate. Through investigation, this teacher used disguised corporal punishment on the student causing slight injury, violating the relevant regulations of the Teachers Law of the Peoples Republic of China, and was then handed over to Education Administration Department. July 14, the Education Administration Department dismissed this teacher from work.”