A primary school teacher identified as Feina Bunyani has been convicted for using her sister’s Junior Certificate to secure a teaching job in the civil service.

According to Ntcheu Magistrate Court records in our possession, Bunyani was nabbed by the graft bursting body, the Anti-Corruption Bureau (ACB) in 2008 and pleaded guilty to all the counts.

The convict according to the records was charged with personating a person named in a certificate, false swearing and giving false information to a person employed in the public service. 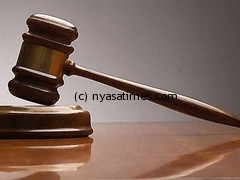 She said Bunyani was found guilty and the court ordered her to pay a fine of K10, 000 or in default serve jail term of 15 months.

“On 2nd February, 2008, we received a complaint alleging that a teacher at Chimbani Primary School in Ntcheu used her younger sister’s certificate to get employed as a teacher with the Malawi Government.

“We instituted investigations into the matter. It was established that Feina Bunyani used her younger sister, Elida Bunyani’s Junior Certificate to get employed as a primary school teacher,” said.

Feina was later sentenced to ten months imprisonment with hard labour on the second and third counts but suspended to 18 months.