A Queens teacherhas been banned from all city schools after he allegedly made inappropriate comments and gestures during a sexual education class.

Former students told CBS 2′s Jessica Schneider that Dyrel Bartee, a teacher at Grover Cleveland High School was getting too explicit in his descriptions.

He has been accused of spreading his legs to demonstrate childbirth and grabbing his crotch to emphasize a point about sexually transmitted diseases. 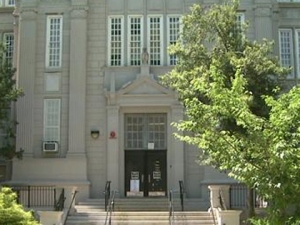 “I seen it for myself, he was a creep,” said Leslie Sanchez.

Sanchez had Bartee as a science teacher and said that she never felt comfortable around him.

“The way he looked at girls wasn’t appropriate, and me, I really didn’t feel comfortable. But I didn’t really say anything,” she said.

Bartee was put on administrative leave in November when students complained that his lessons were becoming too racy.

Bartee began as a substitute Biology and Science teacher in 1999, and began teaching at Grover Cleveland in 2005. In April he was barred from working in all city schools.

Parents were disgusted by the allegations.

“It’s crazy because I have a daughter and I don’t want her to go through this. She goes to public school, I want to be careful,” said Eddie Rosales.

CBS 2 attempted to reach Bartee at home for his side of the story but he was not available.