Teacher At P.S. 208 Arrested For Alleged Sex Abuse Of An 8-Year-Old

An innocent, 8-year-old girl is the alleged victim of multiple sex attacks — by her own teacher.

The teacher is identified as 29-year-old Rafael Sosa of Harlem’s P.S. 208. CBS 2’s Dave Carlin has learned the young girl was allegedly attacked on several occasions in or near the school. Sosa, who was arraigned in Manhattan Criminal Court on Thursday, was removed from the classroom following his arrest. 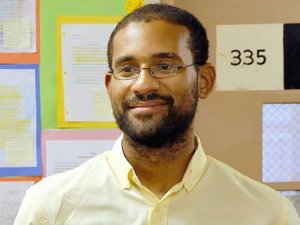 Sosa’s attorney, Virginia LoPreto, called the $75,000 cash bail  “unreasonably high.” She said Sosa’s relationship with the girl was not sexual, that his family and hers were friendly.

But prosecutors said Sosa, a married father, got close to the girl’s mother so he’d have greater access to the student, buying the 8-year-old gifts, including video games and an iPod, and even calling her “daughter” even though they are not related.

According to the criminal complaint, Sosa kissed the child “with an open mouth” while he inserted his finger into her private parts.  During that same period of time, the child was asked to log into Sosa’s e-mail account and send him e-mails stating “I love you, I miss you. My heart belongs to you.”

Shocked to her core, Dionne Reeves learned Thursday afternoon the man who teaches her 11-year-old daughter is behind bars, charged with sexual abuse, course of sexual conduct against a child and endangering the welfare of a child.

“Hopefully there’s a meeting and parents come together, find out and talk to our children and see what happens,” Reeves said.

Reeves said her daughter told her she was put in a different class on Thursday. The reason given was that Sosa had a family emergency.

The Department of Education said Sosa was appointed an elementary school teacher in September 2007 and worked at P.S. 90 in the Bronx. He began at P.S. 208 in Manhattan in September 2009. There were no prior investigations and the DOE said he passed a background check.

“They need to check them closer, their backgrounds. Background checks on these people and parents need to become more involved as well, find out what is going with their children in the classroom with their teachers and so that possibly curtail some of this kind of  behavior,” said parent Susan Abdul Malik Dunn.

Sosa’s arrest is the latest in a string of sex-related arrests of Department of Education employees. Mayor Michael Bloomberg recently rolled out new legislation designed to get teachers brought up on sexual misconduct charges out of classrooms.

Parents wanted to know what the school and Department of Education plan to do about what appears to be an epidemic of alleged teacher predators in public schools.

“From what I’ve heard this is beyond unconscionable. It’s just abhorrent to me and I’m not going to tolerate it,” Walcott said.

Chancellor Walcott was expected to be at P.S. 208 on Friday morning to talk about his efforts to lobby lawmakers in Albany to give him more power to root out and fire sexual predators, to get them out of public schools.