A footage has been revealed showing an autistic student being beaten by a gym teacher in a special educational school in the Black Sea province of Zonguldak, daily Milliyet reported today.

The teacher, O. A., reportedly hit the autistic student, Ruveyda Batak, with a plastic bottle when she would not go back to the classroom after break time. Batak was sitting on the ground and the teacher held the girl’s arm and pulled her up. He then kicked the girl after she lay on the ground again. Another teacher came later on and picked the girl up, according to the footage. 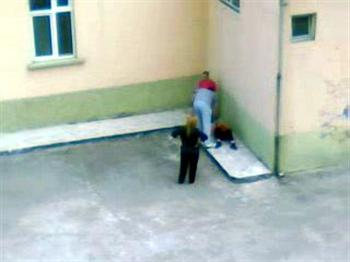 Some college students recorded the incident from a building next to the school on cell phones and delivered the footage to the police.

The parents of Batak filed a complaint after police informed them about the beating. The teacher was taken into custody, but prosecutors released him after the questioning.

Batak’s father also reported the incident to the provincial directorate for education.

The Director of Provincial Education, Turgut Özbek, said a detailed investigation had been launched.

The gym teacher said that he jokingly hit the girl to make her stand up, according to the report.