A Catholic school teacher is under fire after he allegedly hid a camera in a pen and recorded girls undressing inside a classroom storage closet where his students changed.

Joshua Waguespack, 33, was charged Thursday after he reportedly lost his iPad at a DeLand Walmart. A woman found the device earlier this month and told cops it contained “nude photos of children,” authorities told the News-Journal. 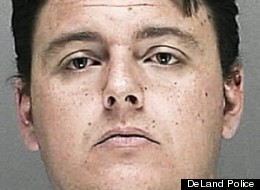 “There was like seven pictures of one girl in her room in her bedroom, fully naked, exposing herself,” the woman’s daughter, Stephanie Anderson, told WKMG. “We’re very upset, I went to St. Peters from kindergarten to eighth grade and all my sisters did as well so we know the entire St. Peter’s community.”

Arrest reports obtained by WKMG stated that Waguespack hid three pen cameras on metal shelves inside the storage closet and recorded 12- and 13-year-old girls taking of their clothes. Police said he admitted to downloading the videos onto his computer and viewing them later.

Waguespack had been employed at St. Peter Catholic School since 2010, Fox 35 reported. School officials maintain that he underwent a background check before his hire.

On Friday, he was granted $10,000 bail and ordered to have no contact with anyone under the age of 18.