A NYC Department of Education Employee has been arrested and charged with sex abuse and endangering the welfare of a child. 35-year-old Hany Abdalla works as a teacher’s aide at Upper West Side elementary school P.S. 84 (The Lillian Weber School for the Arts). A police spokesman tells City RoomAbdalla allegedly “touched a female child 8 years old in inappropriate areas and also had her touch him in inappropriate areas.”

According to the DOE, Abdalla has been working at the school since 2007, and had not been disciplined for anything before this. (Officials also confirm they did conduct a background check on Abdalla before he was hired.) He was suspended without pay on Monday after allegedly making a sexually-charged comment to a student. Now, according to police, his crime was even worse. 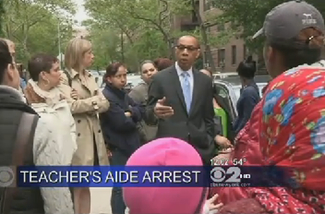 For those keeping track, Abdalla is at least the eighth DOE employee arrested for sex crimes involving students this year. That makes two a month on average, but Schools Chancellor Dennis Walcott says these are all just bad apples. “It’s not an ongoing problem,” Walcott told CBS 2. “Any incident or any allegation is one too many, but it’s not an ongoing problem.”