The former Modesto high school teacher now accused of sexual assault with a minor 14 years ago is expected to appear before a judge Tuesday.

Out on bail, Christopher James Hooker didn’t answer the door Monday when CBS13 paid a visit to the apartment he used to share with his student turned lover, 18-year-old Jordan Powers.

The high school senior moved out after Modesto police arrested Hooker on Friday. He’s accused of sexually assaulting a 17-year-old girl back in 1998 when Hooker taught at Davis High School in Modesto. He met Powers at Enochs High School, where he taught until his February resignation after their relationship went public. 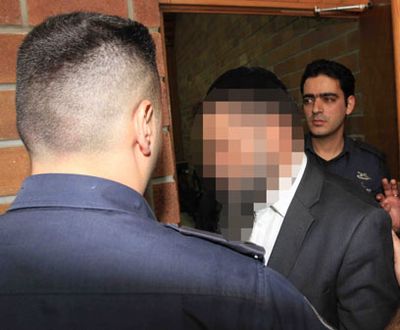 In a phone interview with ABC’s “Good Morning America,” Powers said Hooker told her he met the girl online, they spent time as friends and she made a move on him.

“And she came out of the bathroom naked and he only touched her boobs and he was freaked out so he left and he went home,” Powers said Hooker told him. “He said nothing else happened, but all of that was a lie.”

“I think they have to give him time in jail to learn his lesson because it’s not fair, it’s not right,” neighbor Ismel Cruz said.

Hooker posted bail and neighbors say he quietly returned to the apartment alone. He left his wife and three daughters to be with Jordan Powers, but now she says that relationship is over with after his arrest.

Powers’ mother, Tammie, waged a public war against Hooker, including speaking out against him on “Dr. Phil” and she told CBS13 on Friday she was thrilled with his arrest.

“I’m elated,” she said. “This has been my contention all along, that James Hooker is a predator. He abused his position of authority and I contented that from day one.”

During the police investigation into the teacher-student love affair, detectives say they uncovered the then 17-year-old victim from more than a decade ago.

“I would say to anybody thank you for coming forward and I would encourage if there are other victims or other students that have any other pertinent information, to please come forward,” Tammie Powers said. “Everything counts.”