Paedophiles, violent thugs and drug dealers were among more than
4,000 offenders who applied to become teachers last year despite having
almost 10,000 criminal convictions between them, figures showed today.

Criminal records checks even revealed four previous convictions for child sex offences, including one for a sex attack on a girl under 13, as well as three convictions for assaulting or neglecting a child.

The Criminal Records Bureau (CRB) said that to date checks had helped stop more than 130,000 unsuitable people from working with children and many of the offences would lead to an automatic ban on the offenders becoming teachers. 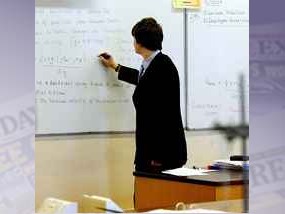 The figures, released to the Press Association following a request under the Freedom of Information Act, revealed the 263,477 checks carried out for the post of “teacher” in 2011 found 4,098 of these had 9,493 previous offences between them.

These included more than 50 sex offences, 11 for arson, and two for making threats to kill.

Some 830 violent offences were highlighted overall, along with more than 550 drugs offences and 11 for causing death by reckless driving.

Checks in previous years also showed hundreds of people were trying to become teachers despite being paedophiles or having violent criminal histories.

Most of the child sex offences involved the possession of child abuse images.

Among the other offences were three counts of manslaughter, three of causing death by reckless driving, five assaults on children, and 16 of arson, the figures showed.

One had even been convicted of infanticide, the figures showed.

Those applying had convictions for prostitution and indecent exposure, as well as 88 offences of assaults occasioning actual bodily harm, five instances of causing grievous bodily harm and 44 attacks on police officers.

Among the 68,366 people who applied to work in nurseries, 1,111 offenders had 3,037 previous offences between them, including three offences of causing death by dangerous driving, one kidnapping, three arson attacks and one act of cruelty to a young person under 16.

Netmums founder Siobhan Freegard said: “Parents will be appalled at these figures.

“Being a schoolteacher or a nursery worker is a position of huge responsibility as you are shaping youngsters’ characters and lives,” she said.

“It’s shocking that thousands of offenders are applying to work with children when they have convictions for child sex attacks, violence and drugs.

“While it is right ex-offenders are given every opportunity to get into employment and build new lives, most parents wouldn’t want someone convicted of a sexual, violent or other serious offence having responsibility for their child in the classroom.

But Brian Lightman, general secretary of the Association of School and College Leaders, added that it was “extremely encouraging that the CRB system is picking up these issues so prospective employers are able to ensure they don’t employ people with these convictions”.

He added that the proportion of those applying to become teachers who had convictions was “very small”.

A CRB spokeswoman said: “Criminal records checks have helped to stop at least 130,000 unsuitable people from working or volunteering with children or vulnerable people.

“Good recruitment practices, such as thorough reference checking, are a key responsibility for all employers, especially those working with children and vulnerable groups.

“Criminal records checks are just one of a range of tools to help employers make the right recruitment decisions.

“Not only is it an offence to knowingly employ a person barred by the Independent Safeguarding Authority, but it is also an offence for a barred person to work or even apply to work with the vulnerable group from which they have been barred.”