Eudora public school officials say they followed standard procedures last year when they hired a teacher who has since been arrested for an alleged improper relationship with a minor.

The Eudora High School English teacher, who is 32 and a current Lawrence resident, was arrested Friday in Wichita on three charges of rape, one count of attempted rape, two counts of aggravated indecent liberties with a child and one count of electronic solicitation of a child.

The Journal-World generally does not identify sex-crime suspects unless they are convicted. He was a teacher in Wichita before coming to Eudora to start this school year.

Wichita police Lt. Jeff Weible said the man was arrested as part of an ongoing investigation. According to a Wichita police report, a woman on Feb. 29 made an allegation to police that her daughter was touched inappropriately beginning in January 2010 through Feb. 1 of this year in Sedgwick County. 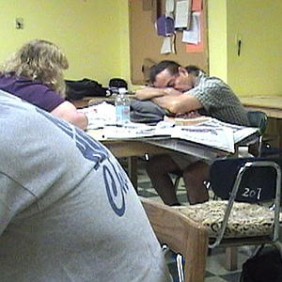 Weible said the girl was 15 when the alleged abuse began.

The Eudora school board hired the teacher in June and followed standard hiring procedures in the process, district spokeswoman Kristin Magette said.

“We have been assured by law enforcement and attorneys that the process we use is the standard for what districts all across the state use and that we do due diligence,” Magette said. She noted the district will likely review the process, but doesn’t have any immediate plans to do so.

The man was an English teacher at Wichita East High School from 2006 to the end of last school year, said Susan Arensman, a Wichita public schools spokeswoman. The man also served as an assistant cross country coach at East in 2004 and 2005.

“We were notified by the Wichita Police Department of his arrest over the weekend. We were also informed that nothing occurred on district property,” she said.

The teacher’s resignation from Wichita East High School came after the Eudora school board approved his appointment.

Eudora’s hiring procedures include a full check of references and a verification of the applicant’s state teaching license, which requires a criminal background check.

In the case of the teacher in question, Magette said the process didn’t raise any red flags.

“I can’t imagine we would have made a hire if there were any concerns. Because we had so many qualified applicants, if we were in a position where there was a concern of that nature, it would not have forced our hand,” Magette said.

The district has placed the man on administrative leave with pay, and a substitute teacher began handling his classes Monday. The high school notified parents of the teacher’s arrest through an automated message and also has asked parents and students to report any concerns about possible inappropriate relationships to school officials or law enforcement.

The man has not yet been formally charged after posting $100,000 bond on Saturday. A court appearance is scheduled for March 26. Weible said police were expected to present information about their ongoing investigation to Sedgwick County prosecutors on Wednesday.